Our research focuses on the regulation of vesicle trafficking mechanisms in plant cells. Our goal is to understand how cells control the flow of proteins and specialized metabolites between different cellular compartments. We are currently working on the following projects: 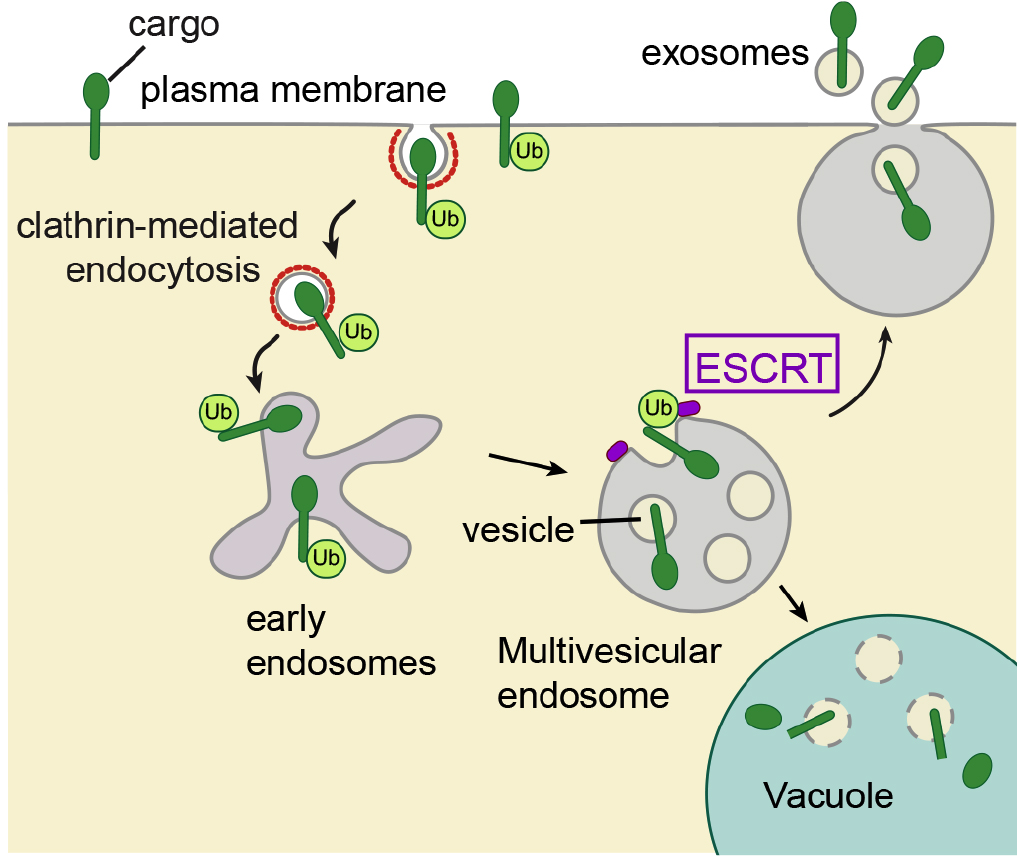 Delivery of seed storage proteins to the vacuole:

Another research area in my laboratory is the transport and post-translational processing of storage proteins in different cell types of the corn kernel. We have found that the same storage proteins undergo different trafficking pathways in different cell types of the corn endosperm (the tissue that stores most of the starch and proteins found in the corn kernel). This has very important implications in agriculture since the trafficking pathways and cellular accumulation sites have drastic effects on post-translational modifications of storage proteins, affecting their antigenicity and digestibility for human and livestock consumption, kernel texture, and yield. We are monitoring the trafficking pathways of these proteins using live-cell imaging; to this end we have developed a method for generating transgenic endosperms in vitro. In addition, we have performed extensive electron tomography analysis of endosperm cells. We have found that a novel, ATG8-independent autophagic mechanism mediates the delivery of storage proteins to vacuoles in endosperm cells. In collaboration with Richard Vierstra at Washington University in St Louis (https://wubio.wustl.edu/people/richard-d-vierstra), we are analyzing canonical and non-canonical (ATG8-independent) trafficking mechanism in maize. 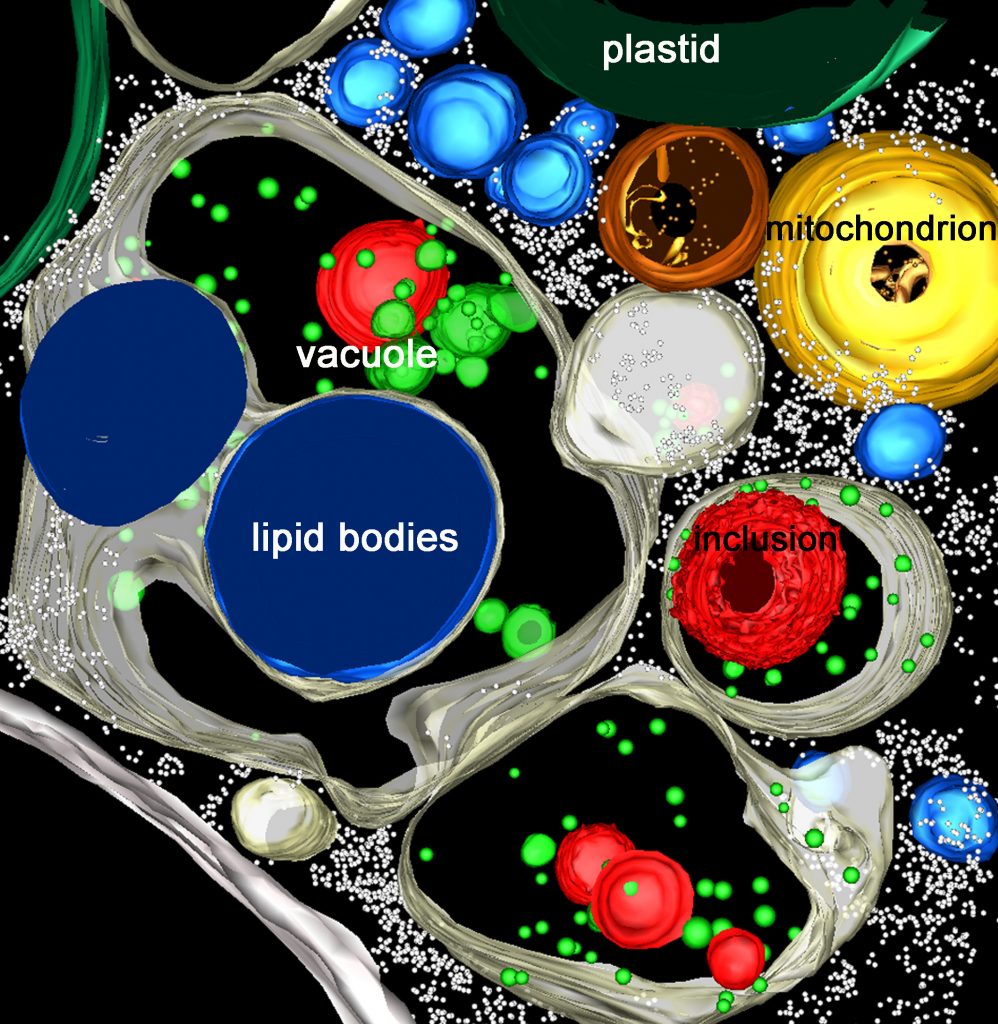 In contrast to the extensive knowledge available on plant metabolism, we know very little how plants transport toxic or highly reactive chemicals from their site of synthesis to where they are ultimately stored. Proper trafficking and storage of plant compounds (phytochemicals) is often a bottleneck in efforts aimed at the rationale engineering of plant metabolism. Thus, understanding the cellular and molecular mechanisms involved in phytochemical trafficking is of the utmost significance. In collaboration with Erich Grotewold (Ohio State University), we are analyzing the subcellular compartmentalization of anthocyanin biosynthesis and storage. We have developed imaging approaches based on the fluorescence decay of anthocyanins to identify anthocyanin subcellular pools in living cells. 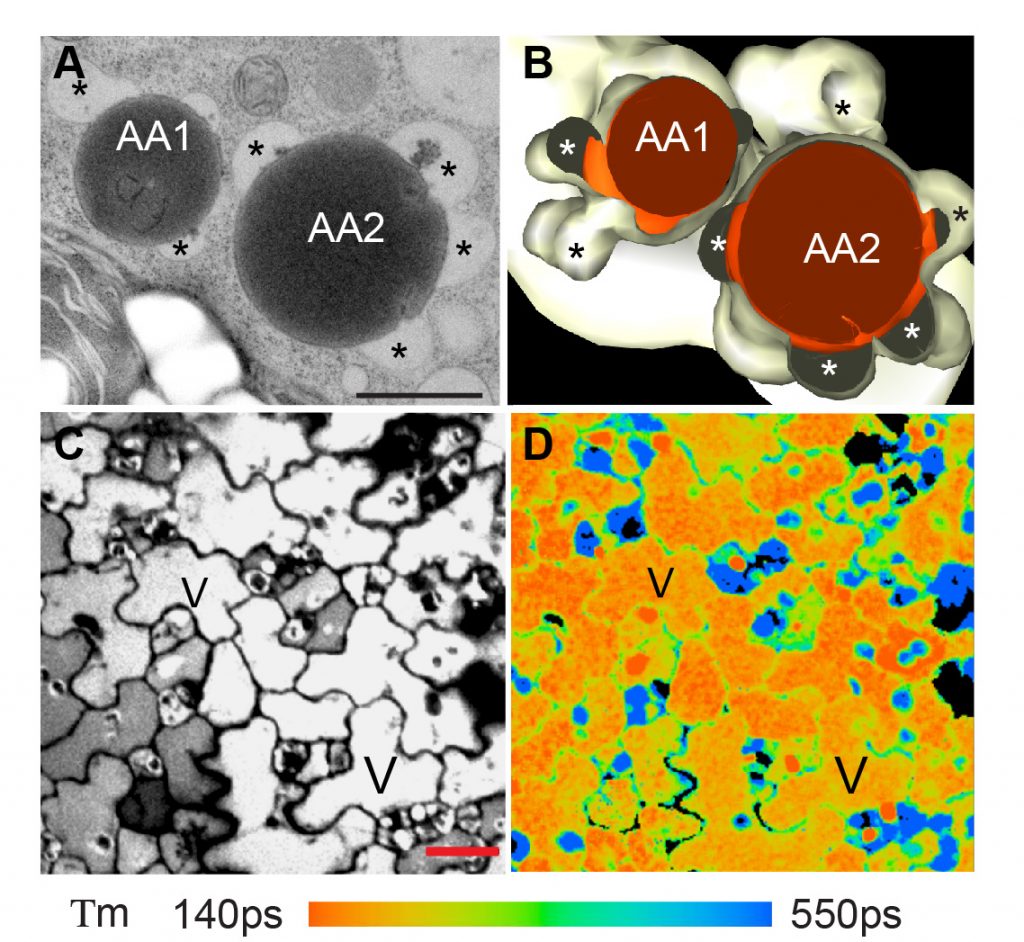 Analysis of anthocyanin trafficking in Arabidopsis. (A) single section and (B) three-dimensional reconstruction of anthocyanin vacuolar inclusions (AVI) in the 5gt mutant. The AVI membrane is depicted in orange and the tonoplast in light yellow. The partial detachment of the tonoplast from the AVI membrane generates lobes indicated by asterisks. AA, anthocyanin aggregates (from Chanoca et al 2015, Plant Cell). (C) Steady-steady fluorescence image and pseudo-colored image (D) according to the anthocyanin fluorescence lifetime values of Arabidopsis cotyledon pavement cells. Color map corresponds to τm, ranging from 140ps to 550ps (from Chanoca et al 2016, Plant J.)

Thousands of signaling membrane proteins co-exist at the plasma membrane and other membranous organelles in cells. How do the signaling partners find each other in a sea of membrane lipids? One mechanism cells use for confining membrane proteins to specific domains in a continuous lipid bilayer is through membrane structuring proteins that establish protein networks or webs. Tetraspanins (TETs) are evolutionary-conserved, integral membrane proteins with membrane-structuring functions. By interacting with each other and with other membrane proteins, such as signaling receptors and adhesion molecules, TET-enriched modules (also called TET webs) bring into physical proximity the multiple components that mediate intercellular signaling during development and specific responses to biotic and abiotic stimuli. We are analyzing the function of TET and TET-like proteins in Arabidopsis to understand their role in cell signaling and plant development.